AMANDA R. MEIER
I love sharing my passion for the ecology of microbes, plants, and insects and my research with others. I've had the opportunity to interact with a lot of fantastic folks, from 4-year-olds to adults, and am always interested in continuing to do so!

If you're interested in arranging a talk or workshop (or anything else you can think of), please don't hesitate to contact me.

Field Day at the University of Georgia Horticultural Farm 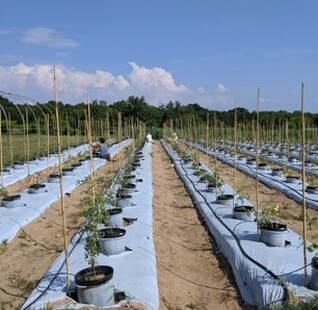 ​​In June 2019, I discussed how we can manage our soils to improve soil health and promote pest-resistant crops with local farmers and home-gardeners at the UGA Field Day. Participants explored our experiment investigating how soil amendments may influence the resistance of tomato plants to pests and learned about common insect pests and diseases of tomatoes.
​In 2016 and 2017, I ran workshops for approximately 50 AP Biology students from Huron High School.  The students learned about mycorrhizal fungi, plant defenses, and insect herbivores through hands-on activities.  Students then developed their own research questions and hypotheses related to mycorrhizal fungi and their ecological effects.
In September 2017, I offered a class as part of the Evenings in the Garden Program at the Michigan State University Extension Tollgate Farm and Education Center.  My class was called The Secret World of Plants: Exploring the invisible among microbes, plants, and insects in your garden. Through a series of examples and hands-on activities, attendees explored the unseen interactions taking place in their gardens every day and learned how to optimize these interactions to improve the health and productivity of their gardens. The class incorporated a range of topics, including how soil microbes help plants grow and defend themselves, how plants defend themselves against enemies and respond to attack, and how plants communicate with each other and with insects using volatile scents. 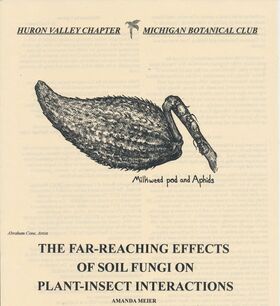 In November 2016, I had the honor of giving a presentation to the Huron Valley Chapter of the Michigan Botanical Club at the Matthaei Botanical Gardens.  My talk was entitled “The far-reaching effects of soil fungi on plant-insect interactions.” I discussed the important role that mycorrhizal fungi play in mediating interactions among plants, insect pests, and their predators aboveground and reviewed my research at the University of Michigan on milkweed plants.  Many thanks to Abraham Cone for creating the beautiful milkweed-aphid artwork! 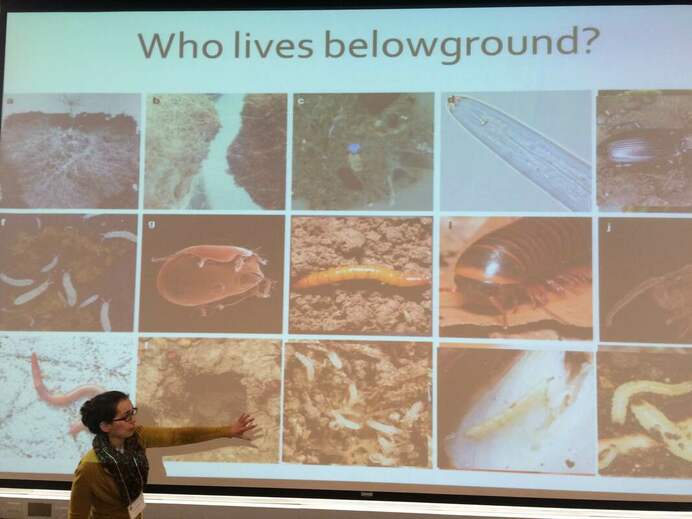 In March 2016, I was invited to give a talk at the annual Wildflower Association of Michigan meeting in the Kellogg Center of Michigan State University.  My talk was titled “The Far-Reaching Effects of Soil Fungi on Plant-Insect Interactions.”  I discussed how beneficial soil fungi, such as mycorrhizal fungi, can have extensive effects on plants and insects above-ground. Mycorrhizal fungi associate with over 80% of all plant species and provide plants with nutrients in exchange for sugars from the plant in a mutually beneficial relationship. I discussed the important role that mycorrhizal fungi play in interactions among plants, insects, and the predators of insects above-ground. I also reviewed my research at the University of Michigan on milkweed (Asclepias) species and their insect herbivores, including monarch caterpillars and aphids. I concluded with comments on why we should consider mycorrhizal fungi in our own natural landscapes.

In 2016, I had the opportunity to be an assistant coach for the Washtenaw International Middle Academy (Ypsilanti, MI) for which I developed science lessons and tutored students in a variety of topics, from ecology to forensics. I also helped supervise the Green Generation event for the Holt Invitational Science Olympiad Regional Tournament (Holt, MI). The students did a fantastic job, winning several awards at the competitions!
With the Museum of Natural History at the University of Michigan, I completed training to become a Science Communication Fellow in 2016. As part of this fantastic program, I developed a hands-on exhibit of my research titled "What's that smell? What makes plants smelly and why do they smell?" where I guided folks through a series of inquiry-based activities through which they discovered how plants can communicate using volatile organic compounds. I had the opportunity to share this exhibit through the public at several events, including Scientist Spotlight at the Museum.

Yakking About Science with the Detroit Free Press

In the summer of 2015, I had the privilege of having my work featured in Yak’s Corner, the Michigan Kids section of the Detroit Free Press that tells kids about science.  Check it out below!

During 2014 and 2015, I held workshops with the help of my lab mates through the U-M Center for Educational Outreach for middle-school students from Ann Arbor and surrounding towns. Our workshops are designed to educate and excite students about potential careers in Biology.  During our workshops, students have the opportunity to tour the lab, spend time with monarch butterflies, and design and carry out their own experiment to bring home with them.